I don’t generally watch commercials on TV. I suspect it’s in my blood. My father watches three or more things on TV at once so he always has something to flip to when a commercial kicks in.

But in the last few months, there have been commercials for a particular company that have caught my eye. When they come on, not only will I not turn the channel, I’ll come running in from another room when I hear one.

And that company would be Amazon Prime.

The first commercial features a tiny horse who isn’t accepted by his big horse friends, so his observant owner makes a purchase on Amazon Prime and, voila: a tiny horse-sized doggy door is set in place for the tiny horse to use whenever he’s feeling down.

The second commercial features a sad golden retriever who just wants to be loved by the family’s new baby. Instead, he scares her. When his owner sees his daughter loving on her stuffed lion, he gets an idea and, voila: one quick order to Amazon and a lion mane hood for the dog arrives – helping the baby to love him.

What these commercials so brilliantly achieve is what anyone in marketing hopes to achieve – to make people feel something. They not only tell a full story in 30 seconds or less, which is impressive, but also make you emotionally connect with their characters, which is really impressive.

I’m a big proponent of the idea that the best way we, as community college marketers, can sell ourselves to our students is to simply be human about it. Tell a story that might make someone laugh aloud (those doggie doe eyes) or smile through the melancholy (that poor horsey). 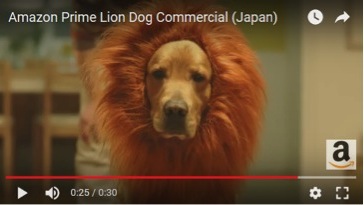 And it never hurts to get a little silly in the process. Did you hear
that song in the tiny horse commercial? I had no idea it was
Sonny and Cher.

It’s easy to get caught in a marketing rut, where we tell the same version of the same student story month in and month out about the down-and-out single mom returning to school or the former factory guy who finds his passion in the healthcare field. There is nothing wrong with these stories – these students are certainly a major reason for our success as two-year colleges – but think how much more we can affect a person if we dig a little deeper and maybe make someone giggle.

Note: There’s a new commercial. Or, maybe it’s not so new and I just completely missed it. Here’s Amazon Prime’s third commercial – complete with the same delightful ingredients: one killer tune, two unlikely friends and that charming resolution.

Jaclyn Y. Garver is the media relations and communications coordinator for the Northeast campus of Ivy Tech Community College in Fort Wayne, Indiana.