Take a Page From Potter: Help Your Grads Identify With Your College

It was right after NCMPR’s summer board meeting in Orlando, a trio of days where district directors and the national office gathered to discuss and work on NCMPR’s strategic plan.

After, District 7 Director James Walters and I spent a (ridiculously hot) day at Universal Studios. (Seriously, our Uber driver was like, “They’re saying this is going to be the hottest day of the year.” Awesome.) 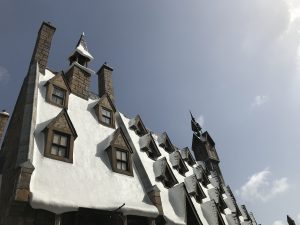 The rooftops in Hogsmeade are covered in snow, which tried to trick us that it wasn’t the hottest day in Orlando so far.

For any Potter fan, one of the best parts of the Wizarding World is the Potter paraphernalia. We eyeballed wands and picked out which character’s we’d want, and we marveled at the beauty in the candy stores. It was all just jelly beans, just frog-shaped bits of chocolate, just lollipops, but in packaging and colors and configurations that felt important and meaningful. 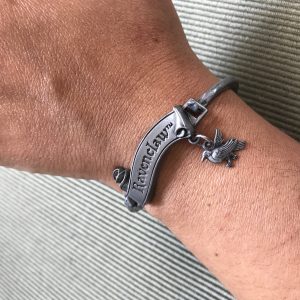 That meaning was perhaps best on display in a Quidditch-themed store, where every item seemed to be emblazoned with one of the four Hogwarts houses. I selected a bracelet and a coin purse and brought my items to the checkout. The young woman at the cash register looked up at me, eyes wide. “You know this is Ravenclaw and this is Slytherin??” she said.

“OK,” she said, seeming relieved. “I just wanted to make sure.”

The interaction made me chuckle, and I kept thinking about it. Potter fans identify so heavily with ONE Hogwarts house that, apparently, people don’t often purchase items from different houses. They’re either ambitious Slytherins OR book smart Ravenclaws – it’s never AND. The Harry Potter books and subsequent movies (and theme parks and websites and plays and …) have done such a remarkable job at highlighting the characteristics of each Hogwarts house that one fan can size up another in the amount of time it takes to say, “I’m in Hufflepuff.”

This relates to community college marketing, I swear, because I’m wondering … How do your graduates identify themselves?

When two-year college marketers promote their institutions to prospective students, there are plenty of identification markers thrown out there: Our education is the best value in the state or Our classes are full of adult-learners like you or We have campuses throughout the region. In other words, If you value your economy or your curiosity, come to XYZ College, which respects your busy life.

But how do community colleges help its students and graduates identify?

If you have a bachelor’s degree from a liberal arts school, you’re probably creative. If you have one from a business school, you’re shrewd. If you went to an ivy league, you’re a brainiac. If your graduating class had a hundred people in it, you’re an individual.

However, it’s not uncommon for two-year college grads to leave their associate degree off their resume entirely. Why? Well … they don’t identify with it. It was a means to an end, and once a two-year college snags a student, it’s easy to not focus quite so much attention on them, beyond the once or twice semesterly Have you enrolled for classes next semester yet?

Wouldn’t you love for your grads – and your local employers – to see your institution on a resume and go, “Oh man, you must be a great decision-maker” or “Wow, you really prioritize your learning”? Figure out how you want your graduates to identify, then shout it from the rooftops.

Maybe even put it on a bracelet or a coin purse.