A few years ago, a friend shared a New Year’s tradition she enjoyed: In lieu of a resolution, she set, simply, a word. Her New Year’s word served as a reminder of something she wanted to accomplish in the new year or a way she wanted to act. Consider it a mantra or an intention.

The idea appealed to me, and I’ve set New Year’s words for myself since – but I’d not before considered that an institution might do the same.

In an NCMPR podcast episode last month (How Arsenio Hall Changed the Career Path for One NCMPR Member), a guest shared a similar idea: Kerri Glover, community relations and marketing director at Asheville-Buncombe Technical Community College in North Carolina, said that A-B Tech’s president announced that the word of the day for the first year of the pandemic was grace. He even made poker chips, golf tees and ball markers with “A-B Tech” and “Grace.” 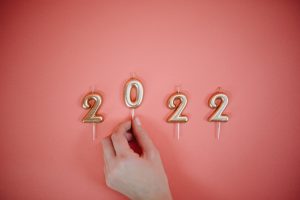 So what could NCMPR’s word for 2022 be? I brainstormed with Lawanna Duran, who heads this blog and is NCMPR’s publications/programming project manager, and so many of the ideas we came up with centered around a theme. This was an accident; we didn’t set out with an overarching umbrella idea, but one emerged anyway.

The theme was about trying new things and being bold, which happened to connect with part of the tagline for this year’s national conference, ignite. We threw out words like revitalize, risk, plunge, renew, defy, challenge, soar, reach.

But one word kept waving at me. Hey! Over here! Check me out, toots! 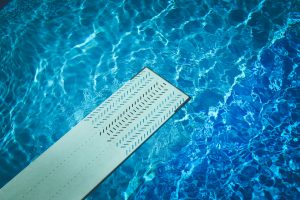 I saw that word, posted up at the bar, gesticulating a raucous story to a bunch of strangers, who were suddenly all her bffs. She had something to say. She might give you an idea, something a little scary, or unorthodox, maybe. She could be your cheerleader while you pause at the end of the high dive, toes gripping the edge, as though they could overpower gravity. Then, when you think she’s reaching out a hand to help you back down the ladder, she gives you a wink and a shove, and whoop, there you go, over the edge.

The word doing all this storytelling and shoving is “brave.”

Brave, the adjective, tells us how to face a challenge. Brave, the verb, suggests the way we might tackle something new. A brave, the noun, is a warrior.

Brave is versatile. It can adapt to our usage, however we need it to, but it always carries with it some courage, some strength.

In 2022, NCMPR is hosting its first in-person national conference since 2019. Another staff might make a different decision, but we’ve weighed the sides, the stats, the goods, the bads, and we made the brave decision to trust our members to be safe. Because we know that being brave can bring with it major rewards – like asking a presenter a question in real-time, to his face, or getting to know a fellow member at a district dinner or after hours in the hotel restaurant. We know attending in person isn’t the right choice for everyone, so we’ll provide a bulk of the content online, too, after the conference.

2022 also marks the second full year of NCMPR’s Diversity, Equity and Inclusion strategic committee. Year one of a new committee is figuring things out. It’s asking questions and toeing the line. It’s wondering: What can NCMPR look like? What should NCMPR look like? And, How can we help? How can we do better? NCMPR’s six staff members are meeting in St. Louis next week for a staff retreat (the last time we did this was, yes, in 2019), and one topic of discussion will be how NCMPR can have a more robust DEI presence, from creating a process to report an issue of discrimination to training staff and board members.

Every year brings its challenges, and no matter how many preparations we might make, we can, and will, still be caught unawares. It’s a near certainty. But we – NCMPR staff, yes, and members, too – can brave whatever happens, because at its core, NCMPR is a net. We are here to cheer you along when you go flailing off that high dive. And then we’ll be around to provide support, or a towel, when you climb out of the pool.

Jaclyn Y. Garver is the communication specialist at NCMPR and the former communications coordinator at Ivy Tech Community College in Fort Wayne, Indiana.