How to Help Meetings Seem More Productive: Change your outlook.

I spent five years working in community college marketing after spending eight in newspapers, and one of the most unexpected things about the industry change was …

Reporters don’t have meetings. You have story idea sessions or editing sit-downs, or you go to a meeting to write about it. But the idea of sitting down with others to go through an agenda? It’s not a thing.

In community colleges, it IS a thing. It’s a thing directors, executive directors, vice chancellors and general leaders love like faculty love brochures, and it was—truly—the only duty of my job that I actively disliked.

It’s not because I didn’t enjoy getting to interact with co-workers from different offices or that I dislike the sharing of ideas. In fact, I dig brainstorming and teamwork. What I struggled with instead is the sense that these meetings never seemed to accomplish their goals. 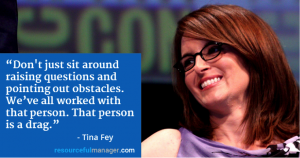 And then we’d have to review our plans, schedules and due dates. And then the next time we met, somehow, we weren’t on schedule.

New research out of Malmö University in Sweden gives a tip for how to deal with these meetings where it seems like nothing gets done. The suggestion isn’t about speaking up and taking charge. It’s not about setting meeting time limits or checking up that committee members are doing what they said they would. Instead, it’s about your own mindset: Don’t view the meeting as something that needs to be productive. Instead, see it as a form of therapy.

Meetings “can be a good way to motivate people, allow them to complain and be acknowledged by colleagues, which is ‘a kind of therapy,’” the study’s author, professor Patrik Hall, told the Daily Mail.

This feels contradictory since spending time in a space where it seems like nothing is accomplished can be incredibly demotivating. However, being in a space with others who are at the same professional level lets participants discuss issues that are personally relevant. It’s a bonding thing.

Hall’s research also looked into the contradiction that even though people don’t like meetings, we keep having more. He told the BBC that the increase is because of a change in workforce: We have fewer worker bees and more managers/strategists/consultants/advisors with unclearly defined roles. Because those leaders are unsure of their duties, they call more meetings.

In addition to viewing those meetings as therapeutic, Hall tells the BBC that the purpose isn’t necessarily to get anything done. Instead, meetings help with employee identity, letting mangers assert the company’s authority, which reminds employees of their role within the company.

To help, Hall suggests that managers book their meeting rooms for a shorter amount of time and assure participants are at the same professional level. This keeps a meeting from turning into a power struggle.

We’d love to hear about how your institution helps employees feel good about the time they spend in meetings. Share a comment, and we may pass your story along to your NCMPR peers!