Even though marketing professionals are notoriously jacks-of-all-trades – who doesn’t have a writer taking photos on staff? Or an event planner designing flyers? – we all have an expertise. We studied graphic design or worked at a newspaper for a decade; and through our own set of circumstances, here we are, in community college marketing. (Come to think of it, I have a non-rhetorical question: Did any of you, in college, say “I want to work as a community college marketer when I grow up”? If so, you should email me so NCMPR can tell your story.)

Me, I’m a journalist by trade. My degree is in newspaper journalism, which I selected because it seemed like the easiest way to get paid to write for a living. I did that for eight years before winding up at a community college for five. And now, if I’m not writing blog posts, bios or emails for NCMPR (or interviewing folks who’ll be featured on the Peer and Simple podcast, or scripting copy for the web/conference program/whatever needs a blurb), I freelance as a features writer. And I’m a poet. And I write novels. And horror short stories.

I am, in my heart and fingertips, a storyteller.

When I attended NCMPR conferences as a member, when I scanned through the program, I drew a big ol’ star next to any storytelling session. Even as an NCMPR staffer, I still duck into storytelling breakouts and short takes because I want to see what the presenter has to say. I want to think of a new way to convey old information. I want to get inspired.

I attended District 3’s conference in early October this year. Pure Creativity was set in Grand Rapids, and things kicked off with keynote Somya Bhagwagar, who started the Humans of New York-esque Students of UMich, when she was a student at the University of Michigan. 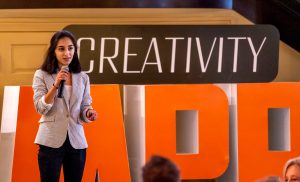 Aside from being a comfortable and engaging speaker, Bhagwagar shared some ideas that this long-time storyteller had never once considered. Ideas that, frankly, flooded me with anxiety at the mere thought of doing things that way.

Before interviewing a student to feature on Students of UMich, Bhagwagar would conduct this much research on the student:

That’s not a typo. There’s not a missing word up there. She would do no research. She didn’t figure out what they studied or where they grew up. If they were involved in any clubs or had ever been arrested. How old were they? What year were they? Had they had any internships? Were they a parent? A part-time student? She did not know any of these things before conducting her interview.

Just typing up that sentence has me fanning my face, like Jaclyn, it’s OK. You don’t have to do that. You Google stalk research your interviewees to your heart’s content. It’s cool. You do you.

I chatted with Bhagwagar after her speech to thank her and share how much I enjoyed hearing about her process – and how much it gave me nervous flutters. She laughed and pointed out how handy it was to not have to report to anyone: Students of UMich was her project. No editors, no bosses, no one to answer to. No word count to hit, no predetermined angle to cover.

Though we might not ever take quite such a radical approach to our interviews, there’s still a key lesson to be learned from Bhagwagar: We might think we know a story going into an interview. We might even have the story mapped out in our heads or on the page already. But we can’t be afraid to ditch that planning and take an unexpected path we learn about during an interview. Chances are, it’s better than what we expected to write about, anyway.

Jaclyn Y. Garver is the communication specialist at NCMPR and the former communications coordinator at Ivy Tech Community College in Fort Wayne, Indiana.