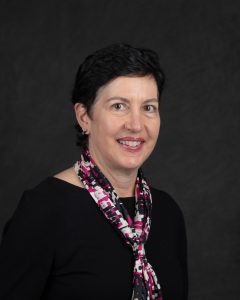 Why would a group of 10 people from Temple College brave near 100-degree heat to tour a village for homeless people in Austin, Texas?

The answer is to get ideas on how we can help our own students who are experiencing homelessness. It’s all part of a larger initiative our college has started called the Circle of Support. The purpose of this initiative is to address barriers that are keeping students from achieving their educational goals – barriers such as transportation, child care, emergency expenses, mental health and, yes, homelessness. A survey we conducted of our students last year found that more than three-quarters of respondents (78%) reported running out of money at least once in the past 12 months, more than half the respondents showed signs of either low or very low food security within the past 30 days, and 9% reported being homeless within the past 12 months.

Our Circle of Support initiative was inspired by Dr. Russell Lowery-Hart, who is the president of Amarillo College in Amarillo, Texas. President Lowery-Hart started the No Excuses Poverty Initiative, which has been profiled extensively in publications such as The Atlantic and the Chronicle of Higher Education.

Amarillo College gets so many requests from other colleges that want to duplicate their initiative that they now host a Culture of Caring Poverty Initiative Summit every summer. Our college has sent representatives to this summit for the past two years. One faculty member came back from the summit so inspired he applied for a Faculty Leave Grant to spend part of his time helping us launch our own initiative. 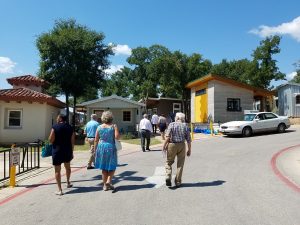 This faculty member was one of the 10 who braved the July heat to make the trip to Austin. The group also included representatives from our foundation as well as several members of the community. Community partnerships are the key to any sort of initiative like our Circle of Support initiative. In fact, the logo for our new initiative has the words “College” and “Community” prominently on it.

And speaking of community, the village for homeless people we toured is called the Community First! Village. Our tour guide, Matt, explained the reasoning behind this. If you just put up a bunch of houses for homeless people, he said, it won’t work. You have to create a real sense of community, which is exactly what they have done at the Community First! Village.

The village currently includes 100 trailers and 140 “tiny houses,” all of which feature very creative designs. The houses don’t have kitchens, which forces the residents to use community kitchens. The village also includes a seven-acre garden, a farm, a hair salon, and even a 500-seat outdoor movie theatre. Residents have access to mental health counseling, dental services and medical services on site. “Microenterprises” in the village, such as a car detailing shop and a food trailer, give residents the opportunity to earn some money and learn marketable skills. All the residents are matched with a caseworker whose job it is to set them up for long-term success. Twenty percent of those living in the village are “missionaries” who also are there to support the residents.

Touring this amazing place, it occurred to me that many of the things they have set up to help these formerly homeless people are the same things we need to have at our college to support students.

Just like you can’t put up a bunch of houses and expect to solve the problem of homelessness, you can’t build a college and expect all the students to be successful. You need to build more – a sense of community and a good support system.