No Shortage of Highs at the “Omaha Stampede”

Omaha, Nebraska is known most for being the hometown of Warren Buffet, great steaks and even the world-renowned Henry Doorly Zoo. To NCMPR District 5 members, however, Omaha will be remembered for the wonderful 2011 “Omaha Stampede” Conference.

As I mentioned in my president’s address, I hadn’t been to Nebraska since the age of 16. My brother and I found ourselves in the midst of the biggest hailstorm I have ever seen. By the time our driver was able to park his beautiful, new pick-up truck under an Interstate 80 viaduct, the truck was a mess — windshield with cracks and exterior all dented. I guess that’s why storm chasers call this place home.

Fortunately, low pressure did not follow me to Nebraska. In fact, there were plenty of highs at this conference. When I arrived, Conference Chair Sheila O’Connor, Metropolitan Community College, Nebraska, and District Director Jim Strayer, Central Community College, Nebraska, had the conference all ready to go. Heather McDorman, NCMPR past president and former District 5 director, told me that District 5 members rock. She was right. The conference, at the elegant Magnolia Hotel, was a success. More than 30 members from the district took part, which began Sunday, September 25 and wrapped up on Tuesday, September 27. 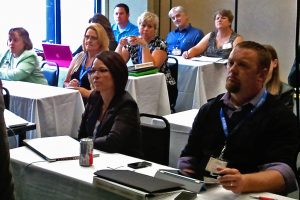 The conference officially began Sunday night with a wonderful welcome by President Randy Schmailzl of Metropolitan Community College, Nebraska. Schmailzl had high praise for NCMPR’s importance to community college communications. That sentiment continued with Communicator of the Year Award Recipient Erin Edlund, Dakota County Community College, Minnesota. In her acceptance comments, Edlund said NCMPR has contributed to her accomplishments and professionalism she carries with her today. NCMPR kudos continued with Pacesetter Award Recipient Dr. Ronald Thomas, Dakota County Community College, Minnesota. Thomas said he has been impressed at how valuable NCMPR’s sense of community is to all our colleges. He also encouraged members to have a story to tell if you want your college message to emotionally resonate with the general public.

Our opening keynoter on Monday morning was Jeff Beals, who told an interesting story about the time Warren Buffet’s car rear-ended his vehicle. Unfortunately, there was not enough damage to claim part of Buffet’s fortune. Beals is the author of “Self Marketing of Power, Branding Yourself As a Business of One”. He discussed how important it is to become a celebrity in your own sphere of interest. The former college administrator told us how to stand out to make the world an easier place to live. He recommends having a marketing plan for yourself and developing an area of self-marketing expertise.

The two-day event provided a nice list of takeaways and tips. Here are some of the highlights and a few tips from the breakouts: Erin Stinner of Western Nebraska Community College, Nebraska, was joined by Sue Kirtland of Propeller and Rober Gochicoa of Academic Marketing Services to share how to craft a strategic message and target its delivery. A major takeaway was if you’re going to do direct mail, there are major cost savings that can be experienced using carrier routes instead of bulk mail.

Erin Edlund and Renee Johnson of Dakota County Community College, Minnesota, shared some great examples of video production, which included many tips and hints on how to save time and money, while producing quality videos. One of the biggest tips was to use natural lighting whenever possible but also make sure you focus on the quality of the audio as much as the video.

Mark Sundermeier, formerly of Metropolitan Community College, Nebraska, provided a jaw-dropping look at violent criminals and how colleges need to circumvent violence by identifying these individuals through the use of threat assessment teams. Mark says wishful thinking is not a strategy because violence can happen anywhere.

Fred Clark, Clark Creative Group, Nebraska, held a breakout/discussion on branding and what makes a successful college brand.  Fred challenged the audience to think about their own colleges’ brands and make sure the brand comes out of the mission, vision and values.

Nebraska State Senator Heath Mello, who is also a member of the Metropolitan Community College team, provoked some valuable discussion on building relationships with policymakers. Key points he made were to have good data and make it simple for legislators. He said we should emphasize graduate information and to the follow up after legislative visits makes a lasting impression with lawmakers. By the way, did you know Nebraska is unique in that it has a one-house legislature?

Closing keynoter Aaron Davis of ADP, Inc., wrapped up the conference with an energetic and fun presentation called, “Perform like a Champion”. The former Nebraska national champion, author and entrepreneur had us take a look at ourselves from the exterior by writing our own obituaries. What an eerie, yet eye-opening exercise. Davis said, “What will your legacy be? Every day, you have a chance to influence it. What is your purpose?” He said everyone must have a “why?” in life.

I couldn’t think of a better way to begin the district visits than with a stampede of takeaways and motivation. I’m very appreciative of the opportunity to meet with so many of our members in our nation’s heartland. I want to thank the many District 5 members who made me feel welcome, especially Jim Strayer, Heather McDorman, Sheila O’Connor, Dewey Price, Erin Edlund, Renee Johnson, Teresa Johnson, Peggy Shreiner, Mat Gilderman, Joel Wires and Kristin Kollbaum. Next stop is Texas, where low pressure is sorely needed.

Kyle Schwarm is NCMPR President and is traveling to NCMPR’s seven districts to attend each district conference.