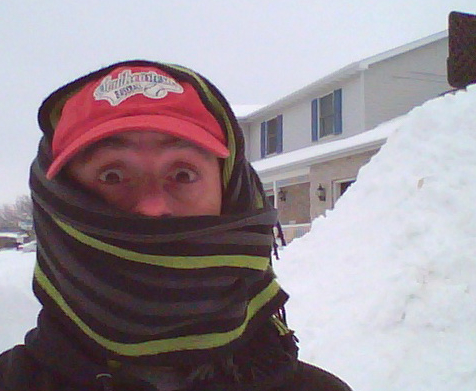 I don’t know about you but I haven’t watched the Olympics this much in years. I found myself wanting to tune in all the time. Maybe it was because I dropped a stack of cash on extra TV spots. Maybe it was because with the mountain of snow next to my driveway, it’s like I was there. Or maybe it’s because there was absolutely nothing else to do.

•    Bob Costas will never, ever forget to pack Visine again.

•    Skeleton is a sport? When did that become a thing?

•    Johnny and Tara: Tone it down a notch. You’re commentators,
not competitors.

I loved the Men’s Downhill events. I think it comes from being a kid and watching ABC Wide World of Sports. Who could forget that ski jumper totally biffing as Jim McKay said, “The agony of defeat?”

There’s something primal about strapping slippery sticks to your feet and speeding down a mountain in long underwear. It’s a sport dreamed up by stir-crazy drunk dudes, which might explain why I like it.

I decided the reason they go down one at a time is so you know who’s who. In the same skin-tight suits and helmets, they’re like an Olympic Whitman’s Sampler. You need that little cheat sheet to tell the caramels from the crèmes, or in this case the Swiss from the Swedes.

The Men’s Super G was awesome. Norway’s Kjetil Jansrud skied 85 mph down a 4000-yard run in 1:18.14. American Andy Weibrecht nabbed the silver a scant 0.3 second later. Superstar Bode Miller and some Canadian dude tied for bronze with a sloth-like 1:18.67.

You could have knitted a scarf in the time it took that slacker in 24th place to finish an epoch-length two seconds later. C’mon! I got things to do!

Some races were determined by a hundredth of a second – less than the blink of an eye. The spectator in me wasn’t phased. Numbers don’t lie.

The marketer in me though, begged the question. Does a victory margin of 0.3 seconds really make you the best in the world? Do two seconds make someone else 24 times less good?

What can the Olympics teach us about community college marketing?

In a world of universal awesomeness, superlatives are meaningless.

Shocker: My school doesn’t have the best program for every single student who walks in our door.

To say anything other would be a big fat lie. There are just too many uncontrollable variables for it to be true.

Since I’m not the Kjetil Jansrud of community college marketing, I won’t go on record saying my college is the best. I mean if KJ can barely defend his claim on any given day, how can I?

That’s why they hired us. They need us to help sex up the place. And we love to answer that call.

However, beware the fine line between marketing and hype.

Curb appeal is important, but if you don’t have the substance to back it up, you squander time and money and hopes and dreams – those of your college, your students, pretty much everybody.

Being anything less than the Taj Mahal doesn’t make your college subpar or crappy though. I’ll let you in on a secret: You don’t need to say you’re the best to recruit students.

People don’t pick your school because you’re the best anyway. They pick you because they trust you. There’s something about you they want to believe – a happy graduate, an inspiring teacher, the promise of a career, and yes, sometimes a fancy building.

So what’s a marketer to do?

Find the value and promote it, boldly yet honestly.

How? Rip a page out of your favorite Olympian’s playbook and analyze your performance to find your weak spots.

Great Olympians don’t win every race – they learn from every race.

So regularly ask for honest feedback from your audience. Do your claims stack up? Are they believable? Is there something you should be saying that you’re not? Are you wasting time pitching a moot point?

Then instead of raving about all the magical unicorns that frequent your campus, you can build trust by soothing anxieties and sharing stories.

That way you can leave the “best” for last.

Jeff Ebbing is director of marketing and communications (a.k.a. the marketing guy) at Southeastern Community College in West Burlington, Iowa.