Establishing a consistent brand across campus can be difficult, especially when your athletic department uses a logo that’s different from the one the rest of the college uses.

We recently redesigned our main college logo, in part because the old logo contained our mascot (a leopard), and most colleges these days don’t include an athletic mascot in their main logos. Our old logo also used the initials “TC” very prominently – a marketing consultant advised us that people outside our college wouldn’t know what “TC” means. However, our athletic department likes using “TC” on all its gear, and also prefers using a different shade of gold than what the college uses in its main logo …

When a large banner with our old logo began showing up in every student-signing photo, I knew some modifications were in order. I offered to pay for a new banner, and the department agreed. The challenge was to come up with a design that everyone would be happy with. It took several tries, but we finally did it. Below are some examples of the progression of designs – showing the give-and-take sometimes required to get to a design that’s acceptable to another office on campus while remaining true to brand standards.

Ultimately, we kept the leopard from our old logo for the new banner but got rid of the logo as a whole. We used a font and color that the athletic department wanted and some text I suggested to substitute for the old logo. The new banner was produced and displayed in time for the final home basketball game of the season, and the athletic director said he received several compliments on it. 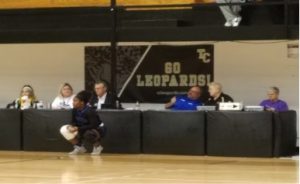